Most homeowners take for granted the ceiling fans spinning around above their heads. Sure, a little moving air feels good, but other than that, no big deal. Yet, you might be surprised to find out that judicious use of ceiling fans during the cooling season will help reduce the workload on your air conditioner. Reducing that workload has a number of positive effects in your home, especially in a climate like ours in South Florida.

It’s important to realize that air movement created by the spinning blades of a ceiling fan won’t actually reduce the temperature in a room. Yet, the moving air hitting the skin creates a cooling effect. In the wintertime, this is called the wind-chill effect. On a hot, blazing summer day in your Florida home, the effect is a good deal more pleasant.

When a ceiling fan’s blade rotation is set to the default, counter-clockwise setting, its movement will blow household air onto room occupants, making them feel three of four degrees (Fahrenheit) cooler. As a result, they can turn up the thermostat temperature three or four degrees, without losing any comfort.

This has two main benefits:

You should remember that the cooling benefits of a ceiling fan only result when a room is occupied. A ceiling fan blowing in an empty room doesn’t cool anybody and doesn’t have a cumulative effect. The fan feels just as cool if it’s turned on the second you walk into the room as it would if it had been operating all day. As with lights, turn off ceiling fans when people leave a room. 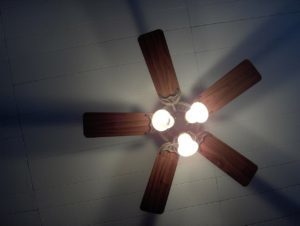 A build up of dust in your home can erode your indoor air quality and worsen allergy symptoms and respiratory conditions like asthma. If dust…

Believe it or not, you’re always sharing your house with mold and bacteria regardless of how spotless it is. But don’t panic just yet. They…