Like setting your clocks forward and changing the battery in the smoke detector, reversing your ceiling fan is an annual rite of spring for many homeowners as they prepare for summer. Ceiling fans are actually 19th century technology, the first indoor comfort appliance powered by alternating current. However, they didn’t find a place in residences until electrification became standard in houses in the early 20th century. As a 21st century energy conservation measure, they’re still right at home.

Ceiling fans produce low-speed, high-volume air movement. During winter, clockwise rotation circulates room air upward, then across the ceiling. This pushes rising hot air trapped at the ceiling back down into the room to warm living spaces. More warmth where it counts reduces the reliance on your furnace and cuts operating costs.

Reversing your ceiling fan to the counter-clockwise rotation flip-flops the direction of air movement, circulating air down into the room instead of up to the ceiling. The principle relies on the wind-chill factor. Air movement over the skin enhances the perception of coolness. The gentle downward breeze produced by a ceiling fan in counter-clockwise rotation makes rooms feel cooler to occupants without lowering the actual air temperature. Homeowners can then nudge the thermostat up to four degrees higher, reducing the length of air conditioner “on” cycles, without any decreased perception of cooling to occupants. For every degree you advance the thermostat setting, you’ll save up to three percent on air conditioning costs.

Most ceiling fans have a directional switch on the side of the motor housing. Remote control fans usually have directional control on the controller. For summer operation, switch to the setting marked “forward” or “counter-clockwise.” If your fan’s moving the right direction, it should appear to be turning counter-clockwise when you’re standing directly beneath it looking up. You should also feel a slight downward breeze generated by the fan. If, like many homeowners, you just leave the fan in the default counterclockwise mode in the summer, then don’t use it in the winter, there’s no need to reverse the direction.

NisAir Air Conditioning & Heating has served Martin, Palm Beach, St. Lucie and Indian River counties since 1973. Ask us if you have any questions about reversing your ceiling fan. 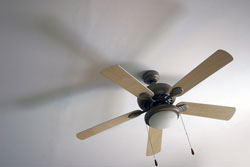 Ceiling fans can provide a big boost to your energy savings every year — if you run the fan blades in the right direction. Not all ceiling fans…

If you’re asked why you need bathroom exhaust fans, you’d probably answer “odor control.” However, if any of your bathrooms lack fans or the…